Avoid These Mistakes to Keep Custody 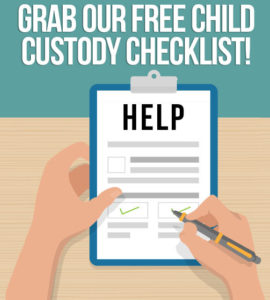 Wouldn’t it be nice to know what judges consider bad behavior by a parent in a child custody case and could cause them to lose custody of their child?

We can tell you that almost every day we have parents ask us “if I do X, will I lose custody?”

Whatever “X” is…chances are that if you have to ask your custody lawyer whether or not you should do it, it is probably a bad idea and is likely to affect your custody case.

We’ve handled thousands of custody cases and can tell that universally there are a number of things parents do that judges hate that absolutely affect whether or not the parent will get physical custody of the kids.

In this article, we address the top 7 things you might be doing that could cause a mother loss of custody.

Some of these things you might not even realize could make you lose custody of your kids.

1. Interrogating Your Kids Could Make You Lose Custody

Almost every day we receive messages from our clients reporting the horrible things their ex is doing with the children.

Recently, we received a call from a concerned client stating that mom is telling the kids “dad is going to lose custody” that dad “is terrible” and that dad is “going to get what’s coming to him.”
Of course, these statements were very upsetting to our client and he insisted that we take immediate action to stop mom from making these statements.
We dug a little deeper . . .
And started asking questions like “how do you know mom is making these statements?”
It turned out that dad was interrogating his children about what mom was saying and what was happening at mom’s home after every single visit.
Needless to say . . .
We had to explain to our client that unless he could prove these statements were being made by mom (and not because the kids were saying so), he would lose any motions we filed to get mom to stop.
In addition, there is no question that the judge’s first question would be “how do you know she’s making these statements?”
And . . .
When dad responds “because my kids keep telling me,” chances are the judge is going to know dad is interrogating his kids and dad could actually risk losing the time he has with his children.
The bottom line . . .
Ask your kids how their time with the ex was.
Ask them about the fun things they did or the adventures they had.
But don’t interrogate them!
Your kids love you both and if your kids feel like they are being drilled on what was said at your ex’s home, they might even be likely to make things up.
Encourage your kids to have a good relationship with your ex and if the kids report something negative, ask your ex about it (not the kids) before you run off to Court and get the judge involved.
If the judge believes that you are interrogating your kids, a term often referred to as polarization, you could lose physical custody. In Nevada, our courts have specific rules that tell parents they cannot talk to their kids about their custody litigation and certainly cannot share court paperwork with their children.
Despite these rules, every once in a while we have a parent who confesses that they have fully explained every detail of their custody to their children because “they don’t want to lie to the kids” or “they want the kids to know what’s going on.”
Or some other lame excuse for putting the kids in the middle of their custody dispute.
Bad…Bad…Bad!
The kids are just that! Kids.
And, they shouldn’t be informed about the details of your custody case.
If a child reports that the parent is having them read court paperwork, that parent will be admonished by the judge and will stand a very good chance of losing custody.
Simply, DO NOT, under any circumstances, allow your children to read the paperwork filed in your custody case.
Keep your kids out of it.

3. Talk badly about your ex to the kids We know that it is difficult to talk positively about your ex.
Of course…it’s your ex and if things were perfect, you two would probably still be together. Right?
However, judges will consider talking badly about your ex part of the “polarization” process.
If a judge believes you are polarizing your kids by making repeated disparaging remarks about your ex, chances are that you could lose custody of your kids.
Even though Parental Alienation and Polarization are viewed rather skeptically by most psychologists, judges still believe in these concepts.
And . . .
This is often a dream strategy for your ex!
If you are repeating terrible comments to the kids about your ex you should expect your ex to roll into court and tell the judge “see judge the reason I haven’t been seeing my kids regularly is that my ex is alienating the kids by talking so terribly about me that the kids don’t want to see me.”
The bottom line .  . .Keep your thoughts to yourself.
Kids are smart. They will develop their own relationship with your ex, for better or worse.
Allow your children to decide for themselves without your negative comments and you should be able to keep custody of your kids.

4. Make major medical decisions for your children without including the other parent

In most Nevada child custody cases, parents are awarded joint legal custody.
This means that decisions regarding medical treatment for your kids must be made by BOTH parents.
So it should come as no surprise that one of the fastest ways to lose custody of your kids is to make major medical decisions for your children without consulting your ex.
For example, we recently had a client tell us that his wife had braces put on their 13 year old without being notified.
He was not asked to meet with the orthodontist. He was not informed that the child needed braces. And…he was not consulted about the cost for braces.
Instead, his ex simply told him that the 13 year now had braces and he owed half the bill. That’s right, he now owed $3,000 for a major medical decision involving his child over which he had no information, no say-so and no consultation.
When he went to court to fight the $3,000 bill, the custody judge told mom that if she continued to obtain major medical care for the child without notifying dad, she would lose custody.
That’s right!
The judge told her that by not consulting dad and obtaining his input, she was violating the joint legal custody provisions of their custody decree and she was interfering in dad’s relationship with the child.
The lesson here?
Notify your ex of major decisions involving the kids.
Don’t make decisions unilaterally.
If you don’t keep your ex informed, you should expect your decisions to ultimately affect your custodial time.

5. Make major educational decisions for your children without including the other parent 6.  Let your kids decide when to have visitation with your ex

This happens all of the time.
We meet with a client who tells us that there is a custodial agreement in place, but that the child cries, has breakdowns and reports that the child does not want to spend time with their ex.
As a result . . . the parent lets the child decide when to have visitation with their ex.
While this may seem like the right thing to do, letting your child decide the visitation schedule could result in you losing physical custody.
Allowing your child to decide on visitation with your ex makes it look like you have no parenting skills and cannot parent your child.
The judge will also thing that you are putting the child in the middle of your problems with your ex by making your child to choose which parent to spend time with.
Visitation is an adult problem and children should not decide.
Simply put, there is a court order that dictates you and your ex’s visitation with the child.
If both parents agree to let the child decide, that agreement should be in writing and filed with the Court.
Otherwise, if you want your child to decide visitation or if the visitation is causing your child anxiety and stress, you MUST go to court and ask the judge to change the visitation schedule.
Failing to get Court permission to allow child discretion could result in you losing custody.

7. Allow no flexibility in your custody schedule On the other extreme of allowing the child to choose visitation, is allowing no flexibility in the custodial schedule.
Let’s face it .  . .
Life happens and life events aren’t always predictable.
Kids get sick, they have extra-curricular events, parents might have to stay late at work or a hundred million other reasons that a strict schedule cannot be followed.
You must allow for some flexibility in the custodial schedule.
For example . . .
We recently went to trial on a case where dad was claiming mom allowed no flexibility in the schedule.
The parties were meeting at a mall for exchanges.
Dad would text mom that he was running late due to a mechanical problem with his car.
Mom’s response would be “sorry. You missed the time in our court papers to do the exchange, so you don’t get to see your son this week.”
Dad was late to the exchange by 5 minutes but missed seeing his son for an entire week because mom refused to allow any flexibility in the schedule.
Needless to say . . . .
The judge was not happy and admonished mom that if this behavior continued, she would lose custody.
Now, we aren’t saying that if a parent is consistently late or missing visits, there shouldn’t be some accountability to stick to the schedule, but parents need to consider the circumstances.

Be flexible with your ex as much as possible.

If schedules need to be changed, then work together to change the schedule.
However, imposing strict time limits in visitation is often unrealistic, and requiring 100% adherence to the schedule could result in you losing custody rights.
We hope you found this article helpful. Leave a comment below to let us know about your custody case or any child custody questions you might have for a child custody attorney.
If you or someone you know needs assistance with a custody case or if you are worried about losing custody, fill out our on-line form or call us at (702) 433-2889. We can help.